At, Himalayanwonders, most of the organic traffic to the website lands directly on our blog. Most of this traffic reads a few pages on the blog and then leaves without ever even looking at any of our products. We figured this situation could be improved if more of the traffic reaching the blog could be enticed to visit our product category and product detail pages. The Funnel Visualization feature in Google Analytics gives us a means to visualize the flow of traffic from the blog along with quantifiable metrics that we can use to measure success as we implement specific changes. Most examples of conversion funnels revolve around the checkout processes but if you have a little creativity and a clear objective in mind you can put funnels to work in a number of situations. 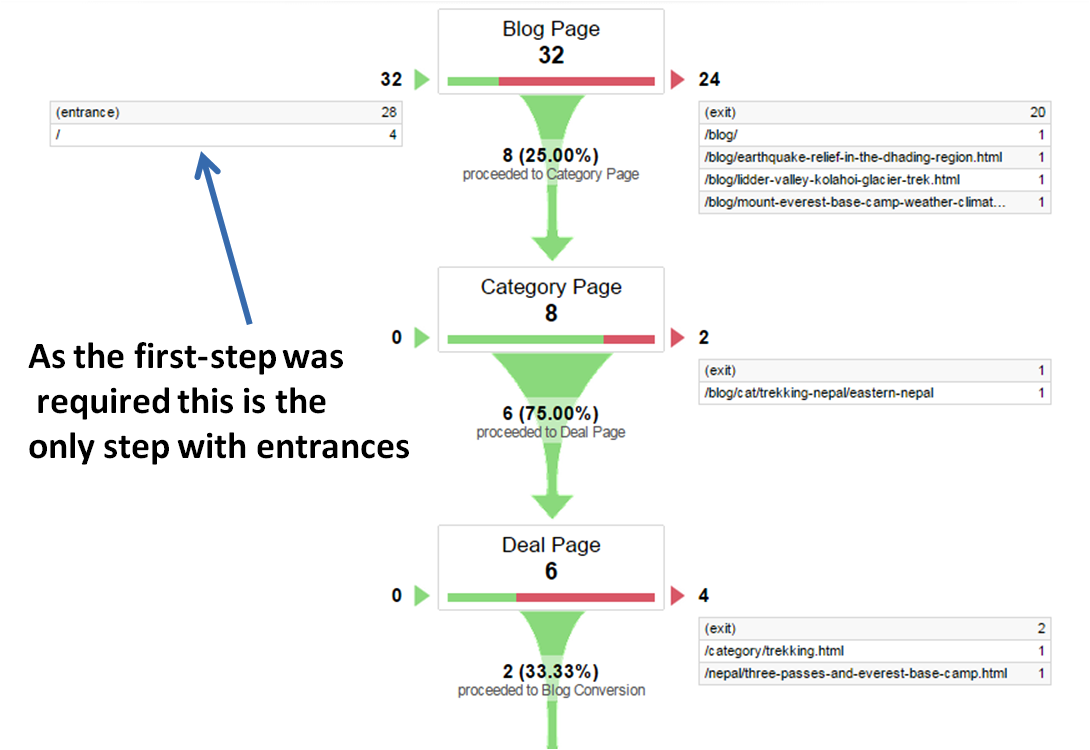 For the purpose of this article I am going to assume that you already have a “Goal” setup in analytics. You can add a funnel to the same goal without impacting the reporting on that goal. No matter how you set up your funnel it will only affect the Visualization report and not the number of conversions related to the goal.

You can imagine a funnel as a series of specific pages that need to be traversed before the goal is reached. This might be steps in a checkout sequence or it might be the typical flow in an e-commerce website where a visitor lands on a category page navigates to a product page and then clicks on the add to cart button. In the later case a look at the Funnel Visualization report can help us quickly determine whether we have a problem with our category page performance or the product detail page performance. 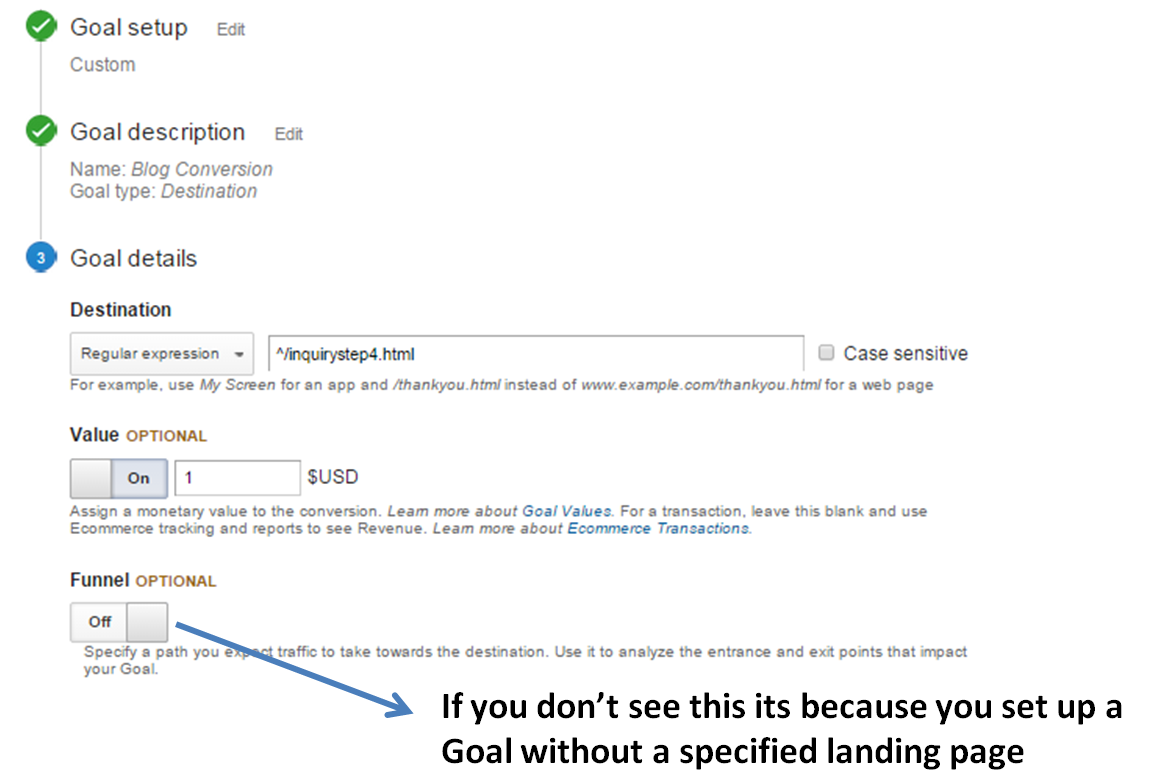 Here is how to set-up a Funnel alongside one of your existing Goals. Navigate to the goal configuration panel for the particular goal you want to setup a funnel. You should see a toggle allowing you to turn on the funnel option as in the image above. You can only setup funnels for “Destination” related goals. If your goal is based on an event, duration or pages/session you won’t have the option. This created a bit of a problem for us as we didn’t have a specific destination page as our lead form is part of a pop-up sequence. We were able to create a destination based goal for what was an event based goal by firing a virtual page load. (See related reading at the bottom of the article) 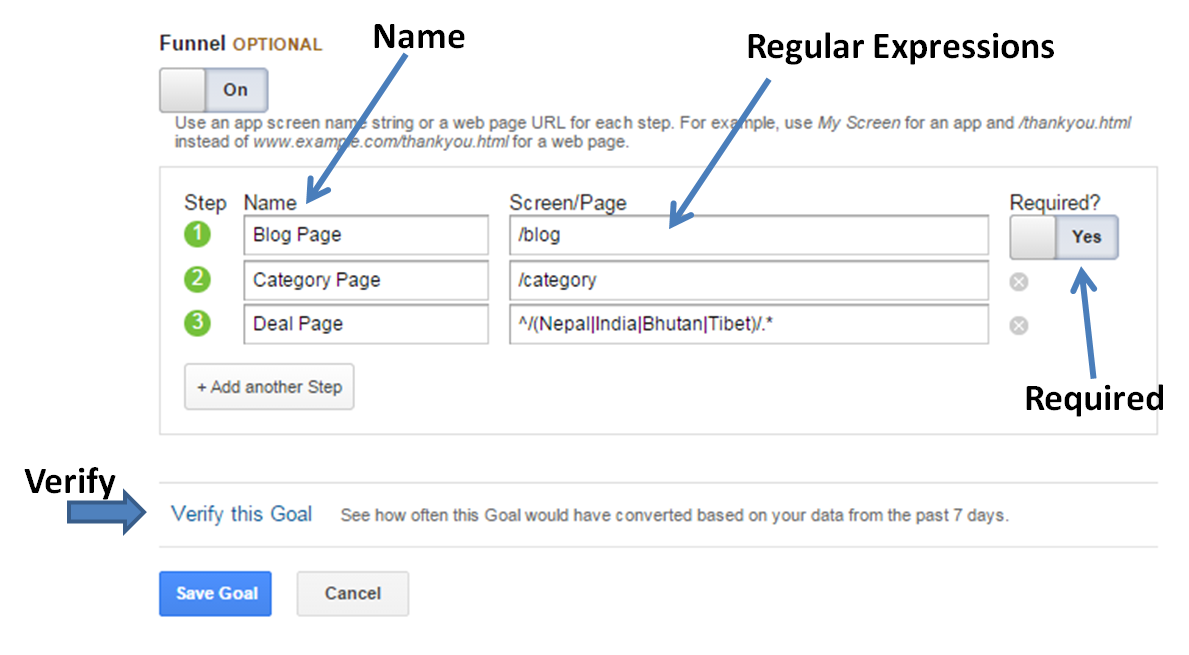 Here is a quick look at the different steps and options available for setting up a funnel.

Name the Funnel Steps – Give your funnel steps names that will make sense and are adequately descriptive.

Set up the Regular Expressions – This is probably the most complicated of the steps and the one that can cause the most problems. The concept of Regular Expressions is too lengthy to adequately cover here (See the suggested reading at the bottom), but unless you are 100% sure of yourself I suggest you spend some time and test each of your regular expressions to see which url’s are being included.

Testing Regular Expressions – To test the regular expressions you are using in the funnel and see the url’s associated with each take the following steps.

Can funnel steps include more than one url? Google Analytics lets us use regular expressions to define a wide variety of url patterns. If you have a strong understanding of these you should be able to group the url patterns that are of the most importance to you.

What if my funnel visualization is not showing any impressions? First make sure that those url’s in the funnel actually have received traffic. If you are sure they are getting traffic you probably have an issue with how you setup your regular expressions so I suggest going back and testing as described above.

What if the conversion rate is 100% for more than one step? This is also the result of setting up incorrect regular expressions and it’s likely that your first step also includes the second step so go back and trying testing as described.

Does setting up a funnel impact the conversion rate of the goal? Funnels are associated with goals but the setup and functioning is independent. If you previously setup the goal adding a funnel to it will have no impact on how the goal is recorded.

What about the order the steps are visited? The actual sequence of steps is not that important unless you require the first step. If a visitor visits the 2nd step and then the 1st step and then converts it will be tracked the same as it had occurred in the conceived order.

David Urmann is an entrepreneur and avid traveler. He keeps an authoritative expertise on many subjects including SEO, SEM, UI/UX Optimization. An avid traveler and a guide book writer Dr. Urmann is the founder of Touristlink.com one of the world's most active social travel networks.